Celebrating the Fifth Anniversary of the Correctness Workshop: Looking Back and Looking Forward

In 2021, the International Workshop on Software Correctness for HPC Applications (Correctness) celebrated its fifth anniversary at the Supercomputing (SC) conference. To mark this occasion, the co-organizers, Ignacio Laguna (LLNL) and Cindy Rubio-González (UC Davis), are proud to share this article, reflecting on its inception and providing their perspective looking forward.

The Correctness workshop started as an attempt to bring together researchers and developers to discuss ideas on the problem of correctness in HPC and scientific software. Over the last decades, the computer science community has seen significant advances in the areas of debugging, testing, and verification for non-HPC and non-scientific applications. However, it has been found that applying existing approaches to debug, test, and verify HPC software is much more complicated than for non-HPC software.

Some of the reasons that make correctness in HPC difficult are: growing use of mixed programming models in scientific software, increasing use of accelerators in HPC systems, the use of different levels of floating-point precision, and compiler optimizations that can change the semantics and correctness of programs (sometimes producing different results between CPU and GPU executions). In general, porting code across multiple platforms and reproducing numerical results (or statistics of such results) is one of the biggest challenges that scientific computing programmers face today.

While performance is the primary driver of innovation in HPC conferences such as SC, the co-organizers thought that innovation in software correctness was needed to address several existing challenges in HPC. The SC conference was the appropriate venue for the workshop since it gathers a large number of researchers and practitioners annually. Since its inception in 2017, the workshop has provided a forum for discussions on software correctness in the HPC and scientific computing community.

The workshop is attended annually by dozens of participants from several countries. Thirty four papers have been presented and published as part of the Correctness workshop over the past five years. The papers have touched on numerous topics of interest in scientific software, including correctness in MPI and OpenMP programs, floating-point error detection, data race checking, debugging tools, mixed-precision correctness, correctness in algorithms and applications, and correctness in emerging programming models. 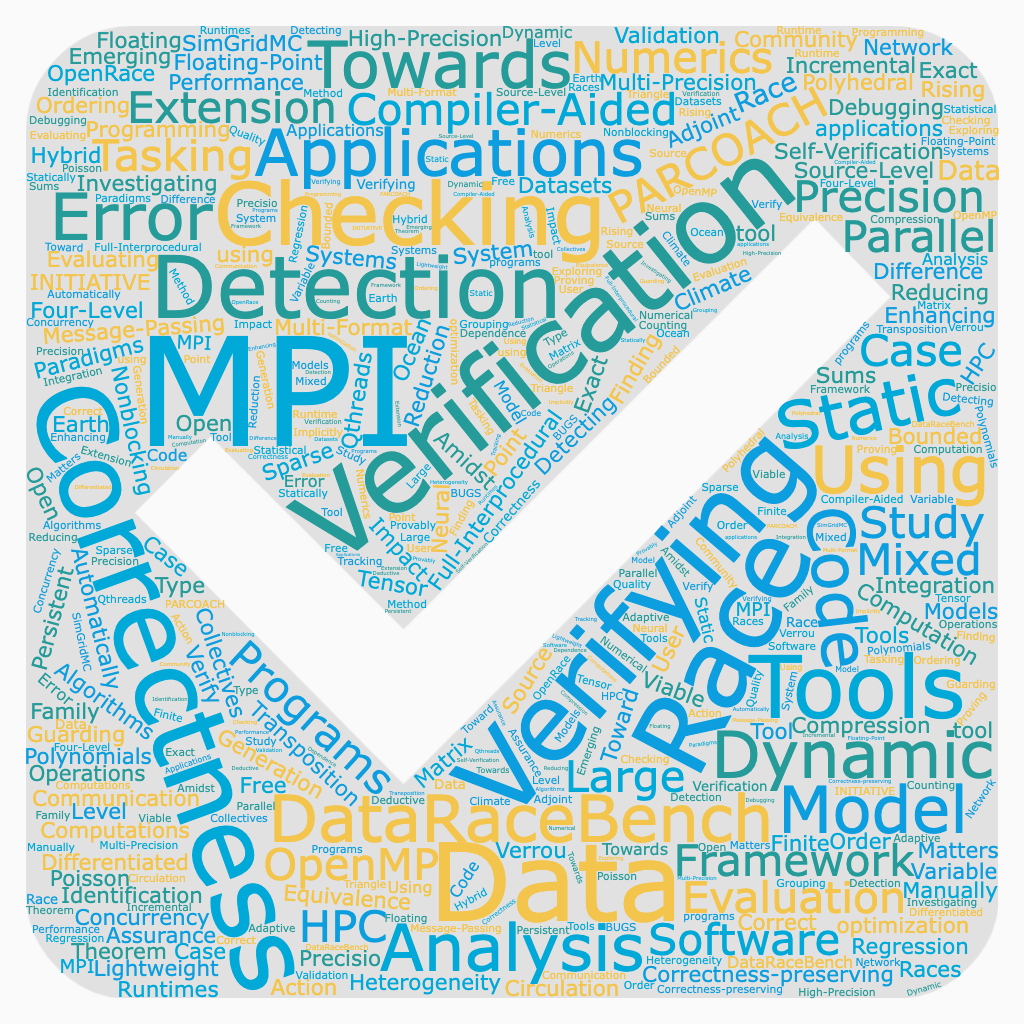 The workshop has had the honor of hosting six keynote speakers who have shared their work and thoughts on the importance and challenges of software correctness: Stephen Siegel (University of Delaware), Ganesh Gopalakrishnan (University of Utah), Jim Demmel (UC Berkeley), Alex Aiken (Stanford University), Allison Baker (NCAR), and David Bailey (LBNL and UC Davis).

Before the Correctness workshop, the community did not have a specific venue to discuss important topics about the correctness of scientific software. Some discussions occurred during the presentation of technical papers at the SC conference; however, such discussions most often emerged in the context of papers which were not related to correctness. The workshop has served as a venue to bring together the community and enable such discussions in a dedicated forum.

With several US-based and international attendees, various collaborations among researchers have emerged due to presentations and discussions at the workshop. In addition, an essential role of the workshop has been connecting scientists and tool developers. This connection is crucial for scientists to express their needs and tool developers to receive feedback on their tools.

Training and mentoring young researchers have played another critical role in the workshop. The workshop has opened the opportunity for training junior researchers by participating in the program committee and for connecting students with internship and job opportunities.

With programming models and HPC systems becoming more complex and heterogeneous, correctness will continue to be a challenge in scientific software—the workshop will continue to provide a venue for discussing methods, tools, and techniques to address such a challenge.

This year, the workshop hosted a panel discussion on a future tool competition to promote the adoption of correctness tools and make existing tools more robust and usable. Moving forward, the co-organizers expect that emerging areas in HPC, such as machine learning, artificial intelligence, and quantum computing, may pose increasingly more significant correctness challenges, which will require a larger community to be solved. The co-organizers also would like to encourage the scientific software community to contribute to the workshop by submitting papers or suggesting speakers or panel topics.

Ignacio Laguna is a Computer Scientist at the Center for Applied Scientific Computing (CASC) at the Lawrence Livermore National Laboratory (LLNL), California. His main area of research is programing models and systems for high-performance computing. He is particularly interested in software correctness, program analysis, compilers, fault tolerance, and debugging. He received his PhD degree in Computer Engineering from Purdue University in 2012 and is the co-founder of the International Workshop on Software Correctness for HPC Applications (Correctness), which has been held at SC for several years.

Cindy Rubio-González is an Associate Professor of Computer Science at UC Davis. She received her Ph.D. from UW-Madison in 2012, and was a Postdoctoral Researcher at UC Berkeley before joining UC Davis. Her research spans the areas of Programming Languages and Software Engineering, with a focus on program analysis and software testing for automated bug finding and program optimization. She is particularly interested in the reliability and performance of systems software and scientific applications. Cindy is a recipient of several awards including a DOE Early Career award and an NSF CAREER award, and is a co-founder of the Correctness workshop.

More on Conferences and Workshops, Reproducibility, and Debugging

The Workshop on Sustainable Software Sustainability

Making Myself Better: What Craftspeople Can Teach Us about Software

HPC and the Lab Manager