Recent Successes with PSIP on HDF5

Simulation of black hole merger with data managed by the HDF5 I/O and data modeling library.

In an evaluation comprising less than half a year's time and half an FTE of cumulative effort, the Productivity and Sustainability Improvement Planning (PSIP) methodology was gainfully employed to effect key process improvements in the HDF5 project: the introduction of a docs-like-code workflow for documentation, migration of the HDF5 code base to GitHub, and the adoption of coding standards with the flexibility to permit automated conversion. Some key take aways are:

PSIP is Agile for software process (as opposed to product) improvements. Quoting from a November 2019 workshop paper describing PSIP,

PSIP breaks from classic software process improvement approaches such as CMM(I), SPICE, ISO 9000 or Six Sigma, in that it trades comprehensive standards and certification-driven assessment for self-defined, internally driven goals. It does, however, carry forward such ideas as having staged models of improvement (like CMM(I)) in the form of progress tracking cards. PSIP is more aligned with agile methods; it adopts their emphasis on iterative improvement and continuous learning.

PSIP helps already overburdened teams define and carry out a series of small, incremental steps of progression towards process improvement goals without significant (there will be some, but a key goal of PSIP is to avoid significant) disruption to ongoing development activities. A key enabling tool in PSIP is the use of Progress Tracking Cards (PTCs) which define the steps of progression towards a given improvement goal. 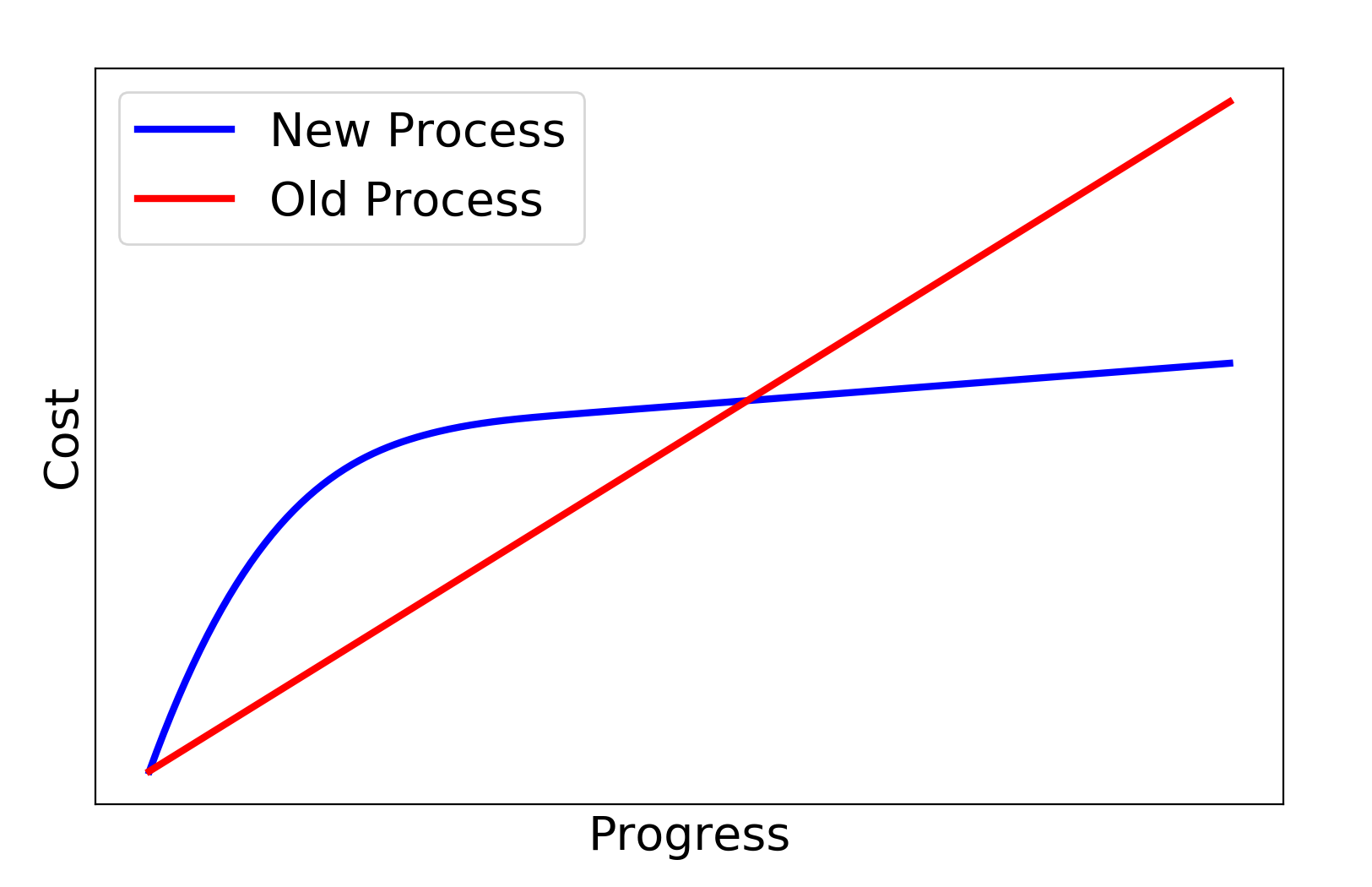 Use of PSIP helps teams to improve software practices, with productivity boosts that quickly recapture the initial investment as well as any costs due to disruption of existing processes.

In April of 2020, the LLNL WSC Research Coordination Council established a $150K contract with The HDF Group (THG), the organization responsible for developing and maintaining HDF5, to employ PSIP to effect some software process improvement goals (IGs). Interested readers are welcome to read the full report.

HDF5 was selected as a use case for evaluating PSIP because NNSA labs are working to broaden HDF5's adoption as a community code. We also expect any process improvements realized will benefit many DOE HPC/CSE applications that depend on HDF5. In its 20+ year history, the development team has practiced various software process improvement methodologies making the team an invaluable resource in offering a comparative perspective on PSIP.

The PSIP process that we followed

As shown in the table below, work kicked off with a two-hour training where PSIP facilitators led THG staff, comprised of a mix of developers, testers, customer support reps, and product managers, through two exercises. This whole-workforce engagement approach is crucial to enabling a project to identify overall productivity “pain points.” Guiding principles of PSIP, that the process is non-judgmental, bottom-up and consensus-driven with input from all stakeholders, are critical to success in gathering input from all staff regarding productivity issues.

In the first exercise, each THG staff member independently did a self-survey of HDF5 software processes. This was followed by a group discussion to compare perceptions and help the team identify common pain points ripe for process improvement. In the second exercise, the team practiced creating a progress tracking card (PTC) for a mutually agreed upon example improvement goal, first individually and then as a group followed by group dialog.

From an initial list of 13 candidate IGs, THG staff brainstormed and selected three to carry forward and create PTCs:

THG staff members then self-organized around the IG(s) they were passionate about drafting and refining PTCs (see images below). Developing quality PTCs is essential but also nontrivial. It can require facilitation by an experienced but objective third party. The challenge is in ensuring that each step has a good definition of "done" and also represents a value-added improvement in existing processes. This approach ensures that if progression through PTC steps ever stalls, the effort expended to reach that point is not at risk of being orphaned or lost. 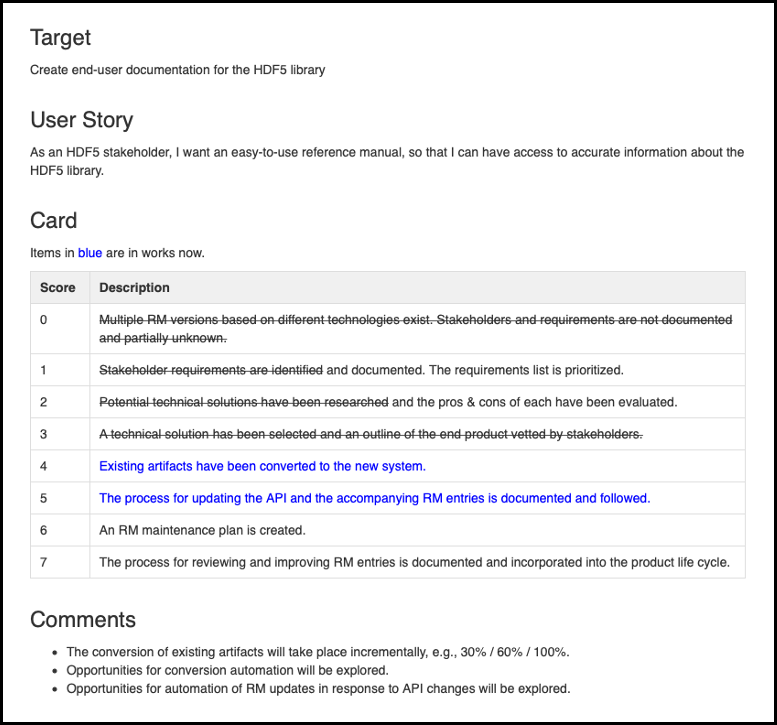 For THG staff, shifting from thinking about product (e.g., delivering on promised features) to thinking about process was, at first, challenging. Time pressures of development have been such that rarely has this team had an opportunity to think holistically about process improvement. It took awhile for THG staff members to put on this new thinking cap. This is likely true of many scientific software development teams. Treating process improvements as deliverables is key to winning a team's commitment to their completion.

As work progressed, a champion for each IG naturally emerged. This is important. An IG champion is passionate about the IG and helps to maintain forward progress. It is also an opportunity for staff members who may not have previously had any leadership role.

PSIP with HDF5 has been a phenomenal success! Substantial progress was made on all three IGs. The progress achieved exceeded expectations. The completion of the majority of steps in IG1 using a combination of Doxygen and MediaWiki represents a true shift in THG culture to treating docs like code. The migration of the HDF5 library to GitHub (IG2) was completed in the first week of October, 2020 and there have already been several community contributed pull requests. For IG3, the team settled on a two-pronged approach where a coding standard was adopted for committed code on GitHub, and CI tools were created to support automated conversion between minor variations in styles favored by different developers.

Over the course of five months, three sub-teams of between 7 and 14 THG staff members consumed a cumulative of only 1/2 FTE of effort to effect these critical process improvements. Subsequent productivity boosts due to improved processes are likely to recapture this cost in the first year, if not sooner.

Project leadership and front line developers at THG expect to continuing using PSIP for future process improvements. THG plans to use PTCs to engage with and manage community contributions impacting process improvements such as a recently planned effort for incrementally integrating multi-threading support throughout the library.

Comparison with other methodologies

PSIP was found to be significantly more light weight than other approaches such as CMM(I) or PMBOK. But that doesn’t necessarily imply that PSIP is only for lightweight tasks. PSIP avoids a lot of front loaded, preparatory work such as cost estimating, WBS, and project planning. In those other methodologies, a lot of that preparatory work is done by project managers or principal investigators, and the team is just given their assignments. In PSIP, all stakeholders are engaged from the beginning, so that the whole process of planning an execution feels more democratized.

PSIP also relieves team members of the baggage of having to learn a lot of special verbiage or terminology. Top-down process improvement models such as CMM(I) can often begin with too much abstraction, making them disconnected from the sometimes unique, concrete software development tasks any specific project demands, and giving some contributors opportunities to hide behind or become overly distracted by these abstractions. The simplicity of PSIP gives people an opportunity to propose and advocate for specific, concrete process improvements.

PSIP is more hands-on and practical and less abstract than these other methodologies. There are more opportunities to demonstrate the completion of various steps, which help to engender a sense of continuous progress. Team members were motivated at the opportunity to learn and apply new technologies or share their knowledge. Better team chemistry and engagement in process improvement were observed throughout PSIP activities.

Typically scientific code teams are expected to incorporate process improvements into their existing plans and funding streams. While it is rare to secure funding primarily for process improvement as was the case here, it would be a mistake to infer that additional funding is the sole reason or even a majority reason for any progress and successes attributable to PSIP.

For THG staff, being asked to improve their processes as a deliverable for a sponsor was not something with which they had much experience, especially when the specific improvements and how to go about enacting them were to be determined primarily by the team and not the sponsor. All stakeholders agree that while additional funding certainly did help, it helped primarily from the perspective of creating a formal contractual obligation to deliver on something, in this case process improvements.

For even smallish scientific code teams of 2-4 FTEs, the $150K here likely represents a small fraction of their whole effort. Furthermore, the effort to implement a PSIP is likely quickly offset by the gains in productivity resulting from improved processes.

The black-hole image is from Wikimedia Commons. Thanks to PSIP facilitators Elsa Gonsiorowski and Reed Milewicz for assisting this effort. Thanks to Elena Pourmal for allowing visibility into internal HDF Group software development activities. Thanks to the LLNL WSC Research Coordination Council for funding this work.

Mark C. Miller is a computer scientist supporting the WSC program at Lawrence Livermore National Laboratory since 1995. He is the lead developer of Silo and MACSio and a contributor to VisIt, ZFP and the IDEAS-ECP projects.

Elena Pourmal has over 20 years experience contributing to and leading projects within the HDF5 eco-system. She is currently the Director of Technical Services and Operations of The HDF Group.

Elsa Gonsiorowski is an HPC I/O Specialist working at Lawrence Livermore National Laboratory. She graduated with her Ph.D. in Computer Science in 2016 from Rensselaer Polytechnic Institute. Elsa works on a number of open source, system software tools to support HPC users as they manage files across an increasingly complex storage hierarchy. She has a passion for useful documentation and CMake. She is also a contributor to the IDEAS-ECP project.

By Osni Marques and Reed Milewicz