E4S logo superimposed on the tile floor of a computer center, representing a machine room that is ready to receive a new computer system with E4S ready to be deployed. Both the room and the software are ready for the new machine.

Software development involves the step-by-step process of inventing, specifying, coding, recording, testing and fixing bugs. But, just because you’ve built software doesn’t mean it’s ready for prime time. Software deployment is a set of crucial activities that takes software and makes it available for use on the target system.

Many of us deploy software for ourselves - build, test, set up paths, etc. But, as our software grows in capability, so also can the deployment process grow in complexity. The software landscape for high-performance computing (HPC) contains a wide range of workloads that require third-party software and commercial products to be installed on HPC systems. This complexity requires expertise from HPC centers to invest time in deploying a software stack to meet the needs of their user community and ensure software runs with optimal performance on the target system architecture.

What is your software deployment strategy at your organization? Have you thought about how you plan to build, install and deploy a software stack that can be sustainable for the lifetime of an HPC system?

Every community needs to think about their software deployment strategy, including:

When deploying a software stack, you may want to consider the following:

Software deployment in an HPC environment

In an HPC environment, this complexity requires a community to tackle the issues. The Extreme-scale Scientific Software Stack (E4S) is a community effort supported by the Exascale Computing Project (ECP) to provide open source software packages for developing, deploying and running scientific applications on HPC platforms. Even with software seemingly packaged and delivered with a bow like E4S, the actual deployment can be fraught with pitfalls and decisions to make for site-specific customizations.

E4S is a collection of 100+ top-level scientific software packages needed for scientific computing in HPC environments. E4S member packages must demonstrate compatibility with the E4S community policies, including a production quality Spack-based build and installation procedure. The Department of Energy Office of Science (DOE SC) Advanced Scientific Computing Research Facilities (NERSC, OLCF and ALCF) are expected to build and deploy E4S on pre-exascale systems, thereby helping to ensure a consistent programming environment for users across facilities. An HPC facility software deployment process is typically aligned with planned system upgrades, since both may require a rebuild of the full software stack.

In 2021, the National Energy Research Scientific Computing Center (NERSC) released their first deployment of E4S/20.10 on Cori using the Spack package manager. NERSC wanted to leverage E4S to enable ECP and NERSC users to accelerate their scientific research with updated versions of software products needed for simulations and to provide feedback to ECP Software Technology teams regarding build failures during deployment so they could be fixed in future versions. Here, we describe the steps and lessons learned to deploy the E4S software stack at NERSC to help others navigate E4S deployment for other computing environments. The lessons learned can also guide future developers of packaged community software on development-to-deployment requirements. A full technical report explains this work in detail.

As illustrated below, the high-level steps used to deploy E4S at NERSC are as follows: 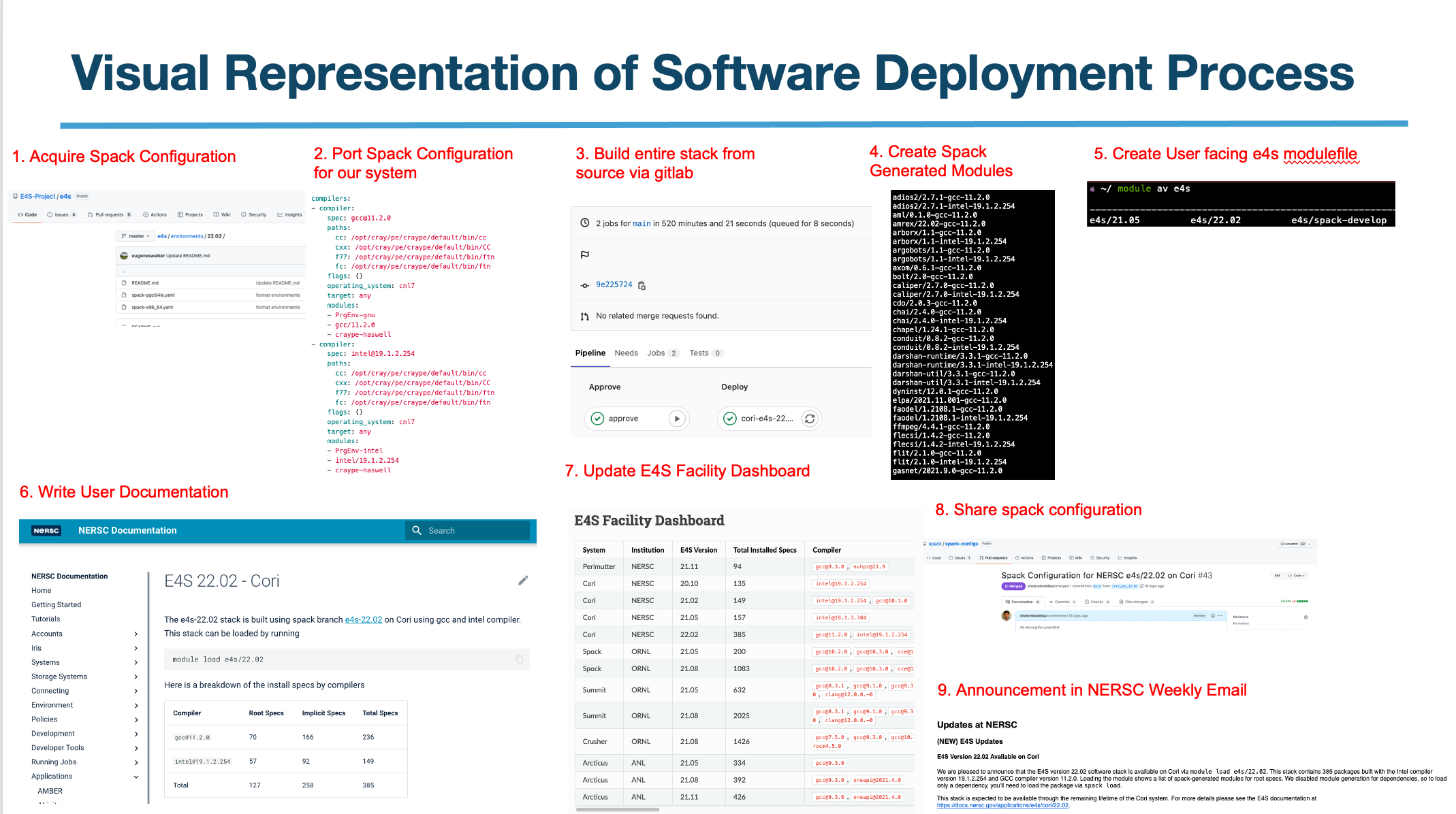 We can also leverage containers to provide a software stack to end users. For instance, E4S comes with several pre-built containers that can be ready to use instantly. If one supports containers, the Singularity Registry HPC can be handy in converting containers into modules so one can access containers using the module command.

We can leverage other packaging tools like pip and Conda to support the Python community, gem for Ruby, cpan for Perl, and cran for the R community.

The NVIDIA GPU Cloud (NGC) can be used to provide pre-built containers optimized for NVIDIA GPUs.

The OpenHPC project is a community effort to provide tools for deploying HPC clusters, including provision tools, a resource manager, development tools and scientific libraries; you can deploy OpenHPC at your site as a means to provide a software stack at your HPC site.

A team for HPC support should take into account user requirements and any monitoring data such as module tracking or software library tracking, for example XALT, to see usage trends to determine which packages to install in their software stack.

Software deployment as an integral part of HPC centers

Software stack deployment requires intimate knowledge of the HPC system as well as in-depth knowledge of the target software packages to ensure that each package is built optimally for the system. A wide variety of workloads typically run on HPC systems (including AI, data analysis, modeling and simulation, remote sensor data), and an HPC center needs to support all types of workloads applicable for their site.

This complexity requires a software deployment team as an integral part of each HPC center. We need to train existing staff and/or increase the workforce to support a comprehensive software stack, such as E4S, at computing facilities. HPC centers can also benefit from one another's experiences by sharing information about the software deployment process. This information may especially benefit those centers that do not already have a well-established deployment process.

We welcome the community to share their deployment strategies and best practices for software stack deployment. Let’s share game plans and learn from one another.

Sameer Shende has helped develop the TAU Performance System, the Program Database Toolkit (PDT), the Extreme-scale Scientific Software Stack (E4S) and the HPCLinux distro. His research interests include tools and techniques for performance instrumentation, measurement, analysis, runtime systems, HPC container runtimes, and compiler optimizations. He serves as a Research Associate Professor and the Director of the Performance Research Laboratory at the University of Oregon, and as the President and Director of ParaTools, Inc., ParaTools, and SAS. He leads the SDK project for the Exascale Computing Project in the area of Programming Models and Runtime. He received a B. Tech. in Electrical Engineering from IIT Bombay, and M.S. and Ph.D. in Computer and Information Science from the University of Oregon.

More on Release and Deployment and Configuration and Builds

SuperLU: How Advances in Software Practices are Increasing Sustainability and Collaboration

Bloodsuckers, Banshees and Brains: A Bestiary of Scary Software Projects and How to Banish Them