The practice of scientific software development is changing:

In this article we make the case for a lightweight requirements specification technique that we believe teams could adopt in practice: user stories. User stories are a well-known and popular technique for representing requirements in Agile software development; they encode requirements in natural language, often from the perspective of an end user. The most common template for user stories is "As a <role>, I want <requirement> so that <reason>"; this is also known as the Connextra template.4 Outside of user requirements, user stories are also employed in software process improvement, that is, for articulating developers' needs. We'll share here our experiences in experimenting with user stories and our lessons learned, and we'll provide guidelines for teams looking to employ user stories in their own projects.

Our experiences with user stories 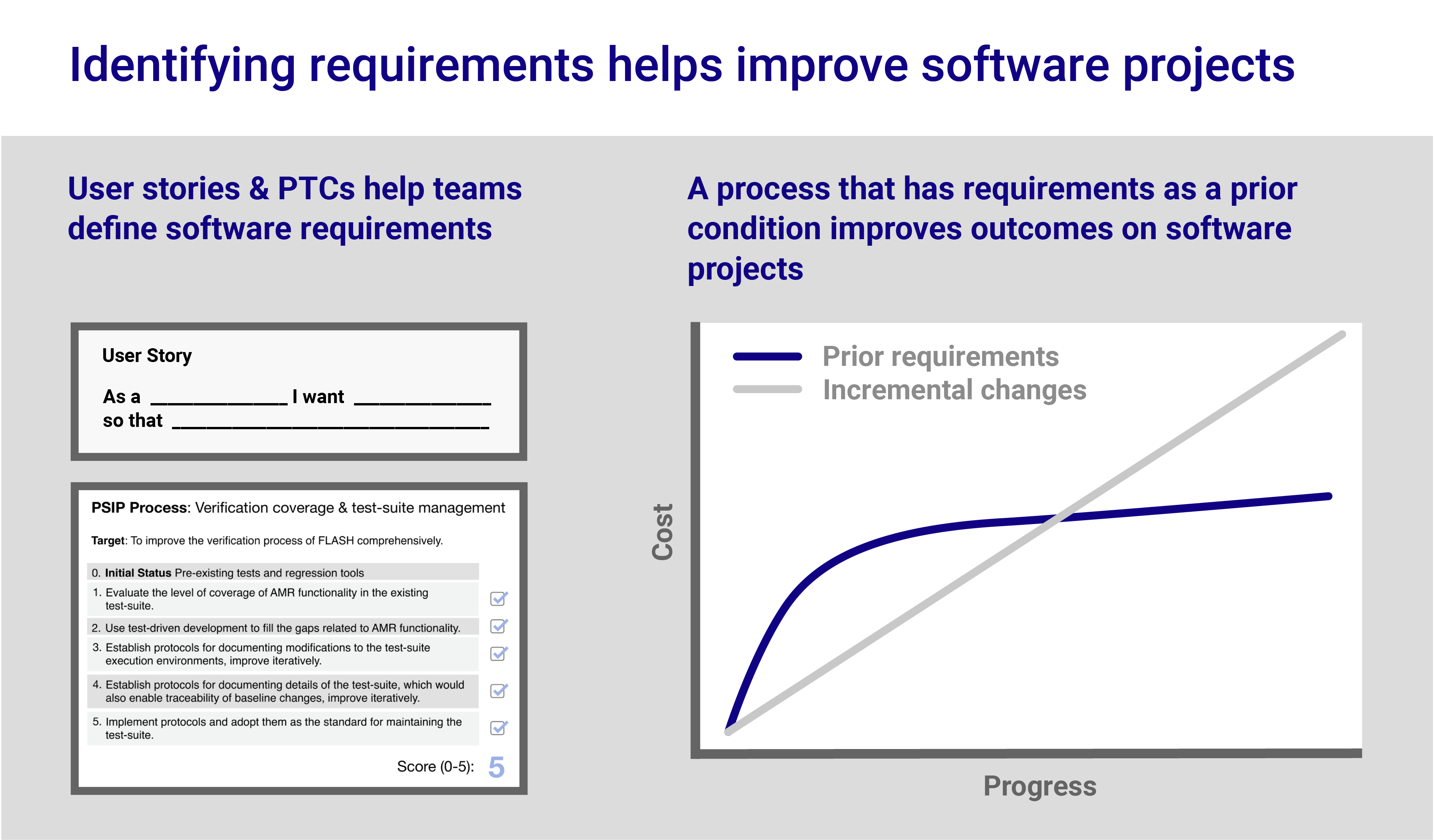 A seamless incorporation of user stories

After that experiment, we realized that user stories could become a component of Productivity and Sustainability Improvement Planning (PSIP), a lightweight workflow for software process improvement that can be used on its own or alongside frameworks such as Kanban, or Agile. PSIP provides tools and resources to set, measure, and realize improvement goals and can be implemented through Progress Tracking Cards (PTCs) to achieve quality goals. To illustrate, the figure above portrays two software development approaches, one (cost prohibitive) based on incremental changes and one (with more long-term efficiencies) that has requirements for programmer productivity and software sustainability. PTCs can be gracefully combined with user stories to suit the latter approach and then used by scientific software teams to help improve software projects. We give three examples.

How you can get started with user stories

For readers looking to adopt user stories within their own projects, we highly recommend starting with a storywriting workshop as we did in the IDEAS-ECP project.

Many resources are available online5 with guidelines on how to write effective user stories, and we encourage teams to peruse those. We do note, however, that none to our knowledge speak directly to scientific software development. Along those lines, we have a small set of guidelines of our own to help frame this story-writing exercise.

The you in user story: Scientific software developers are often their own users, and user stories can be a powerful tool for introspection. We encourage teams to consider user stories as a tool to express what they themselves value and consider important, not just what other external stakeholders consider valuable. Likewise, collaboratively writing user stories presents an opportunity to surface and then resolve potential differences in priorities among different team members.

User stories as experiments: We recommend that teams agree to a "definition of done" for stories, a common set of criteria needed to close out a story (e.g., the story has a deliverable that was met; the work was reviewed by other team members). Closing out a story, however can be tricky for scientific software teams as their software can be constantly evolving; user stories might not pan out or could turn out to be more involved or complicated than originally thought. A useful way to frame a definition of done for user stories is to view them as an experiment. Think of a requirement as a hypothesis that a unit of work will deliver value to the project. That hypothesis should be testable; that is, some criteria for success should be agreed upon in advance. Moreover, the result of that test should ideally be valuable regardless of whether the user story is "successful" or not. As an example, a user story may be the following: "As an application developer, I want to show it is possible to port our application code to the new platform so that we can take advantage of the next-generation hardware." The code, however, (a) may not be able to be ported, (b) can be ported with extensive additional effort, or (c) is relatively easy to port. Gathering the data needed to make that determination is a value-add on its own, regardless of the outcome, and could be used to derive future user stories.

Given the ever-growing demand for complex simulations and analysis, developing the right software in the right way becomes essential. We think that user stories are a valuable tool and technique for accomplishing those goals, and we offer a potential to render intricate goals or tasks in scientific software development into smaller and tangible requirements because (a) they are lightweight and can capture what we want in a natural language; (b) they are easy to write, facilitating their adoption; (c) they encourage reflection and communication, especially with regard to software processes; (d) they can expose differences in assumptions and priorities;and (e) they can help with consensus-building and consequently with commitment to action.

Osni A. Marques is a staff scientist in the Applied Mathematics & Computational Research Division at Lawrence Berkeley National Laboratory. He has worked with software libraries that provide solutions to common and important computational problems in engineering and scientific applications. He has studied and implemented algorithms for the solution of numerical linear algebra problems in applications related to the motion of proteins, acoustics problems, structural analyses, inverse problems in geophysics, and electronic properties of materials. Osni is currently involved in the IDEAS Productivity project and training activities of the DOE Exascale Computing Project.

Reed M. Milewicz is a computer scientist and software engineering researcher in the Department of Software Engineering and Research at Sandia National Laboratories. His research focuses on developing better practices, processes, and tools to improve software development in the scientific domain, ranging from technologies such as compilers and formal verification tools to direct engagement with software teams through evidence-based software process improvement. He leads software science research efforts within his department and is a member of the Interoperable Design of Extreme-Scale Application Software (IDEAS) project, where he is part of the Productivity and Sustainability Improvement Planning team.